It’s a clear night and there’s a full moon just staring down at you. Ever tried to take a photo of the moon, you have a camera right so of course you have and what do you get, a white dot in a sea of black. It’s pretty tricky right, it’s very bright and the shot looked straight forward until I took it and looked at the result.

What was obvious was that for me to get a reasonable image in the frame I needed a telephoto lens and ideally a tripod. I tried a few shots with my 250mm telephoto resting on a beanbag, left the lens on AF and achieved big patches of white blur, not good. So moved to manual focus, and started bracketing shots and achieved some reasonable (though still small) images, great if I just wanted to add a moon to a landscape. 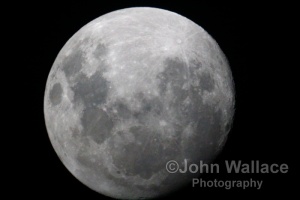 Then I managed to get hold of a small telescope (1200 mm) and with the camera attached for once managed to fill the frame and yes I had to use a tripod but the telescope spotting scope helped as the image was being viewed using the camera preview and without the spotter I would have found searching the blackness for that elusive bright patch really frustrating. Adding to this the fact that for all long lenses the slightest movement to the tripod this end caused big movement the other didn’t help.

The end result after a lot of shots was passable but it was great fun trying to work it out not forgetting of course that the moon is moving all the time so a few minutes after I put it in the frame it was out again. I’ve attached an image showing the result and an image of the cats that I thought would work using the moon as a silhouette.

I’m certain better images can be achieved so no doubt will try again soon.

More images can be found in this sites galleries as well as high definition versions available through my online shop.

A black swan and cygnets on a lake in late afternoon #findyourthing #jwwallace.redbubble.com #swan #cygnets, #blackswan #water #lake #bird #acrylicblock #nature #family #beautyinnature #photography #wildlife #reflection #calm #peaceful #
Not to be missed, these unique examples of my print shirts, especially during the current SALE. All-Over Print Shirts are 100% polyester which wicks moisture and maintains a rich color quality. Visit my online shop for these and more at https://society6.com/jwimages #shareyoursociety6 #photographer #artist #art #prints #clothing #shirts #wildflower #photography #wildflowers #johnwallacephotography #jwimages #sale #snow #red #colors #colorful #abstract #pattern
Mother's Day Sale With Code: MOMGIFTS Start: Wednesday, May 2 2018 @ 12:00am PT End: Thursday, May 3 2018 @ 11:59pm PT Visit my online shop for these and more at https://society6.com/jwimages Details: 40% Off Art Prints + Framed Prints, 30% Off Carry-All Pouches + Mugs, 20% Off Everything Else #ShareYourSociety6 #photographer #artist #art #prints #clothing #homedecor #wildflower #photography #wildflowers #blossom #landscape #trees #silhouette #totebag #carryallpouch #johnwallacephotography #jwimages #sale #MothersDaySale
Rainbow Colors Chiffon Scarf - https://www.zazzle.com.au/rainbow_colors_chiffon_scarf-256217624373630305 Elevate your style with a custom printed scarf in a delicate chiffon fabric. Beautifully finished with a professional baby hem, this scarf is the perfect accent piece that you can wear into autumn and beyond. This scarf and many other products are available in my ZAZZLE Online Shop http://www.zazzle.com/jwimages Visit the collection at https://www.zazzle.com/collections/chiffon_scarves-119055611610481389
A selection of products, the high definition versions are available of hundreds of images and products in my ZAZZLE Online Shop at http://www.zazzle.com/jwimages or visit my website at www.johnwallacephotography.com #Zazzle #johnwallacephotography #products #onlineshopping #mugs #tshirts #iphonecases #cards #prints #animals #www.johnwallacephotography.com #abstracts #art #
“Acoustic Guitar Bag”, Your music is an expression of your personal take on life , shouldn't your gear be as well? 15% Off with code ZSAVEONGIFTS For this image and many hundreds more visit my Zazzle store at http://www.zazzle.com/jwimages #Zazzle #johnwallacephotography #jwimages #colorful #distinctive #artistic #Guitarcase #music #musician #unique #custom #personal
%d bloggers like this: